A few months ago I happened across a satellite TV station that caught my eye. I was scrolling through my Dish Network listings and I saw “The Six Million Dollar Man” was on. Being a child of the late 60’s and 70’s I turned to it to see Steve Austin crash his special plane and the narrator saying “Gentlemen, we can rebuild him. We have the technology. “We can rebuild him. We have the technology. We can make him better than he was. Better…stronger…faster.” Right then it took me back to when I was about 12 years old and running into the living room to watch Col. Austin’s latest mission every week. Then of course they introduced “The Bionic Woman!” Well again, I could not keep from watching that every week too. Watching each one of their individual shows was only topped by watching one or the other’s show where they guest starred on each other’s show. I would head outside after each show and make sounds and act like I was running in slow motion. I even got a Steve Austin action figure that you pushed a button on his back and you could move his arm as you picked up a toy truck, or something else that I would imagine weighed 1000 pounds. It even had a electronic (plastic) chip in his arm that you could take out and pretend you were going to repair him.

I was always a fan of Lee Majors when he was on The Big Valley, even before he played Col. Austin, and Lindsay Wagner as The Bionic Woman was one of my first celebrity crushes. 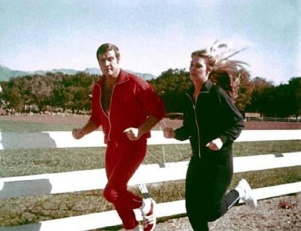 I can honestly say that The Six Million Dollar Man and The Bionic Woman was used as a bargaining chip to make sure I did my chores and homework or I was not allowed to watch them. It worked most of the time!

Those were the days, TV was about using your imagination, pushing kids to think and push themselves to run faster, be stronger and be an honest person. While those shows were my favorites, Family Entertainment Television (FETV) has more shows that were hits at the time, like Charlie’s Angles, Hart to Hart, Marcus  Welby, M.D. and some 80’s hits like Magnum PI and Knight Rider! All shows about good people vs. bad people, with  the good always winning.

Then, I realized that in the afternoon, they had shows like The Dick Van Dyke Show, I Love Lucy, The Roy Rogers Show and The Lone Ranger (the original). I found myself turning on FETV and watching all the shows from 4pm until 11pm every night and remembering what it was like when television was decent and didn’t have all the reality trash shows they have now. Even though the special effects of the day are not even close to what they are today, I honestly would rather watch these shows than what is on TV now.

Now don’t get me wrong, there are some shows today that I do like, and many of the old shows they are remaking them to fit the current time, but I just can’t help but love the honest way TV shows were presented back in the old days. To be honest, there is no way anyone can come close to the original actors in these shows.

Even in black and white I begin to imagine riding a white stallion, chasing the bad guys and leaving a silver bullet behind before riding off into the sunset with Tonto and giving a mighty “Hi Yo Silver, Away!”

FETV can be found on Dish Network channel 82. Unfortunately, Direct TV does not carry this channel.

6 thoughts on “When TV Shows Were Good”