I have lived in Tennessee for close to 16 years, hunted deer a few times here, but most of the time, I would drive back to West Virginia to hunt. When I did hunt in Tennessee, it was on TWRA land, and myself along with other hunters who didn’t own land to hunt on would be there.

This year I was fortunate enough to have a land owner offer his land to allow me to hunt and the best part, it was only five miles away. So, opening day of gun season came around yesterday, it was sunny, but cold. The wind was blowing pretty hard and the ground was soggy from the storms the night before. I can’t really remember a time that I went into the woods and never saw a deer, but opening day 2016, that is just what happened. 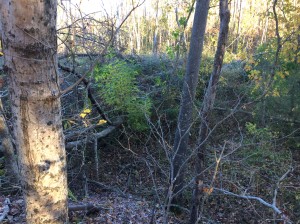 I stayed out all day, trying different locations, knowing the deer were bedded down, but one of the other parts about West Tennessee, is that it is fields and brush.

So as tough as it was to admit I didn’t see a deer opening day, I got up early the second day (today) and decided to try a new strategy. I started out in a 50 yard open woods (pretty much the only open woods on the land) that I had placed a game camera in

before season. I had seen many does, turkeys, and what I thought (and still do) to be wild hogs. I hoped that something would come by. But as the time went on, nothing, and so I moved.

I decided to set up behind a log, near a large field. Hoping that I could glass the fringe of the brush. Around 10 a.m. I heard a squirrel barking and I knew something was there, I just could not see it.

After about 10 minutes of listening to the sentry alarm, I caught a glimpse of something on the ground. At first I thought it might be a rabbit or the sentry, but as it came up over the rolling field, I saw the first deer in the past two days of hunting. It was a nice one, not a wall-hanger, but a trophy for the plate. So I waited until he stopped walking and shot. He began to run, so I shot again as he ducked into the woods.

I walked over to find a bright red trail and within 20 yards, there he was.

Trophy for the plate, a nice six point. Every day I am able to hunt, I thank God for the beauty he put on earth and the food to fill my freezer.

Even on days that I don’t see a deer, I call it a success, because I am able to enjoy the outdoors.