Another terrorist decides to kill Americans and the focus by those who don’t believe in the right for law-abiding citizens to own guns of course blame the gun! if you have read on many outdoor, conservative, firearm and hunting blogs, you have read all of the reasons why the liberals think it is alright to blame guns, gun shops, gun and ammo manufacturers, and all the reasons they are just nuts! Many times I have written about the myth of the assault rifle, as well as the non-existent “gun show loophole!”

I read a comment on an article the other day that said there is no difference between an AR-15 and a M16. So I ask the person that if a car runs over people, can we classify it as a tank? Of course they didn’t have the answer because they were too busy drinking the koolaid! I have done some research, updated the FBI homicide crime statistics on what kills more people.  You can see my slideshow here

You can see a steady decline in the homicide rate, while incidentally, the rate of gun ownership increased, (of course if you take out Chicago, DC and a few other big liberal cities, there are almost no homicides).

So, the liberals in congress, the president and others who do not have a clue about guns decided that terrorists are really not the problem, but the it is the guns fault and they want to make more laws that criminals and terrorists will ignore, instead of enforcing the laws on the books and you have to be politically correct!

So my take is, if they really want to make a difference and slow down the gun violence, they need to make a mandatory maximum sentence to anyone who is convicted of a violent crime using a firearm! You rob a store while armed, 15 years! You shoot someone, attempted murder, no less than 25 years! You take the criminals off the streets and you will slow down the violent crimes! Yes I know, it won’t happen over night, but this is a much better idea than to punish law-abiding gun owners because of the acts of criminals. Terrorists, well, first off, we can’t be held back for calling them what they are! We can’t cower to them and hope that love and hugs will keep them from trying to kill us! We have to get tough and we have to fight back.

When did the liberals become so wimpy? Why is it that they would rather make America a target than to deal with the real threats? They [liberals] love to coddle the people who hate us most and that just doesn’t work! You have people like Michael Moore and Piers Morgan who are peace loving and non-violent types who think that if you grab your guitar and sing to the criminals (and terrorists), that they will drop their guns and sing along! They have gone so far as to take rifle icons off of Apple products. I am guessing because, like the so called “journalist” from the Chicago Sun said when he shot an AR-15, it will give you PTSD!

The second Amendment was written for a reason, and the president, Hillary, Piers or any other liberal thinks they will take our guns away are sadly mistaken. 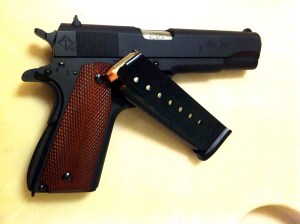 So a new year begins and it is politics as usual against guns. The biggest problem with the gun debate is, the democrats almost always come to the table unarmed (pun intended).

California Representative Adam Schiff along with a partner in dumbness has decided to try to pass a bill that will make gun manufacturers liable for how people decide to use their guns. Here is a tweet that states his intentions: 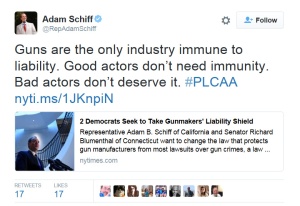 Now, the problem is, “That’s not how it works, that’s not how any of this works,” to quote the esurance lady.

Still having problems understanding, let’s use cars as an example.

Example one: Chevy builds a car then sends it to the dealer. A car buyer comes in, shows license and insurance and pays the money and drives off the lot. The brakes fail and the car careens into a building full of people, who is liable? If you said the manufacturer, give yourself a pat on the back.

Example two:  Chevy builds a car then sends it to the dealer. A car buyer comes in, shows license and insurance and pays the money and drives off the lot. The owner of the car decides to load up cans of gas in the trunk, and runs his car into a building, causing an explosion killing and injuring many. Who is liable now? If you said the manufacturer, please hit your head against the wall. That is the person’s fault.

Same thing goes with guns. If you can’t understand that, then you have an agenda that is not healthy, you are lying to yourself and anyone you try to convince that you are correct. That is what you have in these anti-gun crazies that have no clue what they are talking about.

I will leave you with the ultimate in stupidity from the anti-gunners:

First is a YouTube video from Colorado Representative Diana DeGette

My favorite ad by the Bloomberg fanatics: 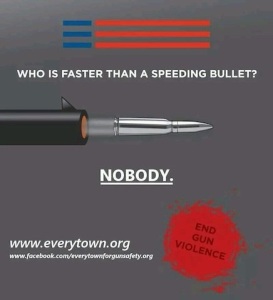 Comment below if you can see the problem with this ad.

Now that you are ARMED with facts, use them for good and stop the ignorance from the left.

Learn How To Survive Any Disaster Situation

HuntHER- Keeping HER in the Hunt

Because we’re all recovering from something.

A blog about getting over your own personal hurdles so you can get outside and live.

...Connecting people to the outdoors & one another

I Belong to the Woods

the Adventures of an Eastern Shore Huntress

At Your Core-Hunting And Existing Outdoors

In a different light: my view of the world.

"OFF"-Sprey Raptor Deterrent
How to Provide

Raised in a Barn

Giving a voice to agriculture.